Joined 3 mo ago
·
4 Posts
I have pictures it’s an excellent condition the best I can find out it was made in 1897 we think. Can anyone tell me or confirm from photos or from the serial numbers what the gun would be worth?

Joined Jun 5, 2013
·
1,510 Posts
You have an Iver Johnson 2nd Model Safety Hammer Automatic that was manufactured in 1898. It is chambered in .32 S&W and is considered a blackpowder frame. It is not sage for modern smokeless ammunition.

It has been re-nickled as the trigger guard, trigger and hammer would not have originally been nickle plated.

Not sure where you came up with ladies pistol. These were a common personal defense gun from the late 1890's thru the 1940's or so. It were smaller than the larger. 38 S&W versions and easier to conceal.

Joined 3 mo ago
·
4 Posts
Ty for the response..This is where I got it was a ladies purse pistol 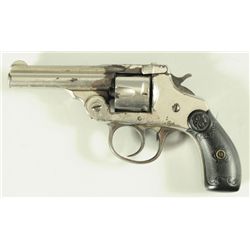 Maybe they were referring to the case, which has a clasp similar to a coin purse. Its not a term that I have heard before regarding and Iver Johnson.

BTW, the pistol on the link is a 1st Model, you can tell but the barrel latch.

Joined 3 mo ago
·
4 Posts
Any idea what it would be worth?

Joined 3 mo ago
·
4 Posts
Thank you so much for taking the time to answer my questions and to respond
1 - 7 of 7 Posts
Join the discussion
Continue with Facebook
Continue with Google
or sign up with email
About this Discussion
6 Replies
2 Participants
Last post:
Valady26 3 mo ago
The Firearms Forum
A forum community dedicated to all firearm owners and enthusiasts. Come join the discussion about optics, hunting, gunsmithing, styles, reviews, accessories, classifieds, and more!
Full Forum Listing
Explore Our Forums
The Ask the Pros & What's It Worth? Forum The Ammo & Reloading Forum Technical Questions & Information .22-Rimfire Forum Centerfire Pistols & Revolvers
Recommended Communities