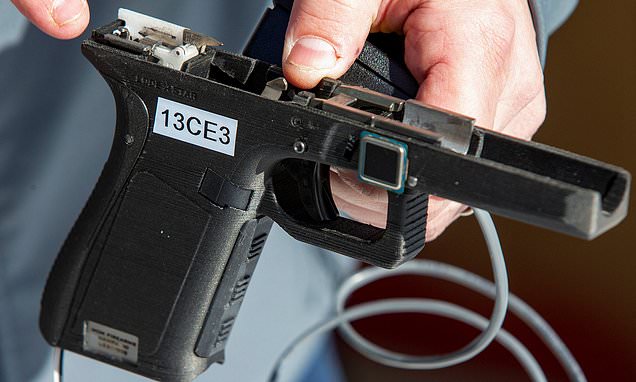 Smart Glock-style guns could hit the US market this year

Smart guns that verify users with fingerprint readers or radio frequency identification could hit the US market this year. LodeStar Works and SmartGunz are making a push into the industry.

www.dailymail.co.uk
I have no opinion yet.

Joined 11 mo ago
·
676 Posts
I do I wouldn't want one. electronics like this and guns shouldn't be mixed.

Joined Oct 28, 2009
·
2,056 Posts
What happens when you hear glass break at 4am & you grab your gun but because you are in a cold sweat it doesn't recognize you.
How many of us that have the thumb print locks on our phones can get into them right out of the shower?
I'm not going to let electronics keep me from defending my home & loved ones.

Joined Jan 21, 2013
·
150 Posts
This isn't really an opinion but often times I carry my pocket pistol but at other times my wife carries it. We share it on our CC permits among others. With this new technology we could no longer do this with a fingerprint activated trigger. A chip though could be passed around. I don't wear jewelry of any sort including bracelets, rings or watches. A chip would have to be kept in a pocket. Then there is a chance you'd leave home without the chip and render your defense weapon useless.
Before someone else suggests it, NO, I wouldn't tape the chip to the hand grip on the gun. LOL
I

Smoke said:
How many of us that have the thumb print locks on our phones can get into them right out of the shower?
Click to expand...

Joined 5 mo ago
·
340 Posts
The technology is being pushed by gun control groups, it serves no practical purpose whatsoever IMO.

Joined Feb 18, 2005
·
6,648 Posts
I'm in the electrical/electronics/controls design field for a living. I don't even want an electronic keypad on my gun safes.

This idea has been thrown around since the late-90s though. There's nothing new in the talk. No one except politicians were interested then and the same holds true today.

Old School or Nothing

I can hear it now in the not too distant future:

Guess what your gun will only operate when its within 100 ft of a transponder located on your assigned firing range. By the way you are only scheduled to use the range on Jan1 and Jul1 each year so your firearm only will operate on those days and the condictional use tax is 1000$ each day. Since it only works at the range you may as well keep it in lockup there. If you disable or remove your gun arrest electronics you will be identified as a felon and no longer have the right to own one. Have a nice day.

Joined Jan 7, 2020
·
534 Posts
Maybe a recording that plays the Miranda rights before it will operate.
Cops should love that. 😁

Joined May 30, 2020
·
1,932 Posts
I remember when they had the magnetic lock for S&W revolvers and you had to wear a ring to unlock the main spring. Back then the kids were little and I probably hadn't bought a safe yet. I really wouldn't have minded having that for the model 19 I had back then. I believe in Illinois you had to use a trigger lock with kids around and it might have been handy. But this smart stuff is about too risky for me. I still use a flip phone because just about everytime my wife hands me her android it seems to have a mind of its own.

Joined 12 mo ago
·
179 Posts
Let the market decide. My M&P is already safe to the point that I'M the determining factor in whether it fires.

Jump to navigationJump to search
The New Jersey Childproof Handgun Law, also known as P.L.2002, c.130, was a now-repealed law that would restrict the sale of handguns in New Jersey to smart guns that "can only be fired by an authorized or recognized user" and would take effect three years after the technology is available for retail purposes. It has been a controversial issue for the National Rifle Association and many gun owners because of its restrictions and the unusual move that "legislates a product that does not exist".[1]
On July 16, 2019 Gov. Murphy signed into law a bill[2] which repealed substantially all of the original Childproof Handgun Law and replaced it with a requirement that after the state Attorney General approves a production model each firearms retailer in the state would be required to carry and display at least one smart gun on their shelves with "a sign... disclosing the features of personalized handguns that are not offered by traditional handguns".[2]
History[edit]
The law passed on December 23, 2002, and provides a timetable for implementation.[1] Specifically:

The amended bill specifies that three years after it is determined that personalized handguns are available for retail purposes, it will be illegal for any registered or licensed firearms manufacturer or dealer to transport, sell, expose for sale, possess for sale, assign or transfer any handgun unless that handgun is a personalized handgun.[3]
Click to expand...

New Jersey State Senator Joseph A. Palaia, a member of the Republican Party from Monmouth County was a primary sponsor of the legislation[1]
Numerous parties blamed the law for causing research into smartgun technologies to stop. Inc. columnist Joseph Steinberg also criticized the naming of the law as "a terrible misnomer that insinuates that smartguns are somehow childproof, a notion that might encourage owners not to treat the weapons with the same care as they would conventional weapons."[4]
In 2014, the introduction of the Armatix iP1, which can identify authorized users via an electronic bracelet, rekindled debate regarding the law[5][6] Death threats were received in May 2014 by an owner of Engage Armaments in Maryland, who was considering selling the gun but eventually backed off.[7] On May 2, 2014, New Jersey Senate Majority Leader Loretta Weinberg said she would introduce a bill repealing the 2002 law if the National Rifle Association would agree not to stand in the way of smart gun technology.[8]
On May 19, 2014, the Brady Campaign to Prevent Gun Violence and the local chapter of the Million Mom March sued the state of New Jersey, claiming none of the required quarterly reports on the status of personalized guns were filed between at least 2004 and 2012.[9] They said in a statement:

New Jersey law requires the attorney general to report on the availability of personal handgun technology, and that law hasn't been complied with for 10 years. It's particularly important now because there's evidence that personalized handguns have been available for sale in at least two locations.[9]
Click to expand...

In November 2014, the Attorney General opined that the existing smart guns do not meet the requirements of the law.[10][11]